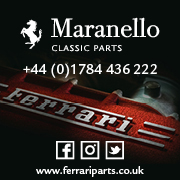 The Ferrari 288 GTO is one of the most famous and recognisable prancing horses ever made and the first in the line of 'special series' production cars. Created as a homologation version of a 308 GTB, the 288 was reportedly produced for Ferrari to compete in Group B racing, with only 272 examples being made from 1984-1986. However, Group B was scrapped and the GTO was never to compete. All 272 examples produced remained as purely road cars and all were finished in Rosso Corsa from factory, except for one example which was Black.

Despite never racing, the car that was left behind is still one of the most remarkable looking and iconic road cars ever produced. The 288 GTO is powered by a longitudinally mounted 2.9-litre twin turbocharged V8, pushing out around 400bhp, enough to accelerate the car from 0-60 mph in 5 seconds flat and on to a top speed of 189 mph, making it one of the fastest road-legal cars of its era. The 288 also received a 5-speed racing transmission, a wider track and wheels, and a lightweight body comprised of aluminium and fiberglass. With just 272 examples produced during its 2 year period, the 288 GTO is the rarest of the hailed ‘Ferrari Big 5’, with the cars that followed, the F40, F50, Enzo, and La Ferrari all being made to higher production numbers.

The car we are fortunate enough to offer was delivered new in January 1985 to official dealer Nuova Rolvo Automobili in Genova, Italy. The car was specified from new with air conditioning and power windows and was finished in the iconic colour combination of Rosso Corsa over Nero leather. Just a few months after delivery, the car made its way over to a Dr Allen Meril of Garland Texas, USA and remained with him for the next 32 years. During his ownership, the car was used very regularly, covering almost 34,000 KMs in the first 3 years of ownership! The car maintains the US Carfax report detailing its life in the US from 1985 to 2018.

In 2019, the car was imported to the United Kingdom and was swiftly sent for a major mechanical overhaul with Joe Macari Servicing, this involved a full engine service with fresh cambelts, a new clutch and flywheel, new tyres all round, and a suspension rebuild, ensuring the car now drives superbly and is ready to be enjoyed.

The car has also recently been awarded Classiche Certification confirming its matching numbers engine and gearbox. Being the first in a line of ‘special series’ Ferrari production cars, the 288 GTO is a highly desirable and exclusive car, making it the perfect addition to any Ferrari collection and a rare opportunity to invest in a piece of automotive history.